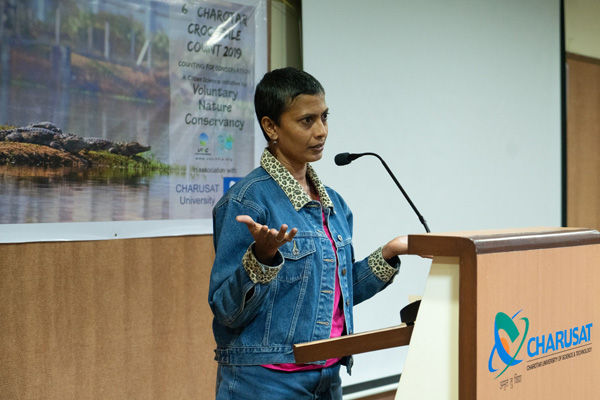 A famous wildlife filmmaker and now a fulltime writer for over a decade, Janaki Lenin founded Draco Films (along with Romulus Whitaker) and produced more than a dozen films for National Geographic Television.  She is also the author of books “My Husband and Other Animals”, “A King Cobra’s Summer” and “My Husband and Other Animals 2 – The Wildlife Adventure Continues”.

She finds herself forging a new identity as a book publisher and writer these days. She writes about wildlife science and conservation practice in India. Her focus  as a  publisher is mainly on producing world-class field guides for the fauna of India and making them available in 15 Indian languages at subsidized rates. She has written on a wide range of wildlife and conservation subjects for national newspapers, wildlife and travel magazines.

She also facilitated a working group of researchers which drafted a national action plan for non-human primates living with humans in 2005. She also drafted an action plan for the mitigation of human-elephant conflict in India in collaboration with Asian Nature Conservation Foundation, Bangalore and has contributed to the Guidelines for Human-Leopard Conflict Management. Between 2008 and 2012, she was the Regional Chair for the IUCN/SSC/Crocodile Specialist Group (South Asia and Iran), Executive Secretary of the Gharial Conservation Alliance and a member of IUCN’s Theme on the Social and Environmental Accountability of the Private Sector.